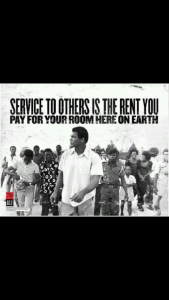 In honor of the Greatest Athlete and Public Figure of our time, I wanted to take this moment to recognize him.  He did serve humanity.   His voice continues to echo around the world.

Instead of boring you with the day’s medical drama, I wanted to talk about the humanity of this mission.

People continue to live the best as they can.  Some will cry, others will laugh, while others withdraw from society.  Seeing tough times is a difficult thing to fathom.  We all believe that life is difficult.  We all complain of petty things.  I for one, do whine a lot.  It takes an experience like this to see things from a different perspective.

No matter of your political views, people need to be treated like humans.  Most people in the world are good.  We do have some that have a tendency to ruin it all.  Our lives have changed via the media, horrific terrorist actions, political negative rhetoric, and just plain apathy.    When people just pass by a refugee camp just to take pictures for their curiosity……when a Gorilla receives more press versus the 800 migrants who had drowned last week trying to reach Sicily.  I do not understand.

I was so amazed of the kind hearted NGOs and volunteers.  I saw many Germans, Greeks, Spaniards, British, and Americans who gave their time to help these victims.  I ran into this guy with a TCU T-Shirt two days ago.  I went up to him and commended his Horned Frogs for a good football season.  He said that he was from Denton, Texas.  He had that typical Texan drawl.  He told me that he came here to see if he could be any assistance.  Out of the Blue!   I met another woman from New Jersey.  This was her 3rd time in 6 months doing mission work.  I met a German woman who just wanted to be with children.  I could go on and on. 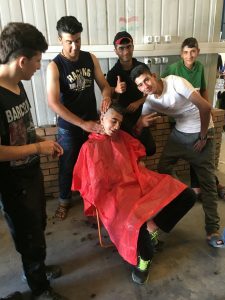 These guys wanted to show off while I took their picture.  Have to earn a living.  Why not?  Be a Barber! 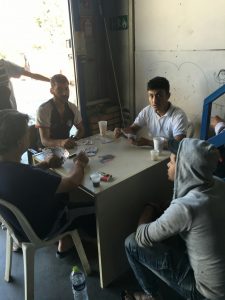 Passing time!  They have nothing else better to do.  Might as well play cards. 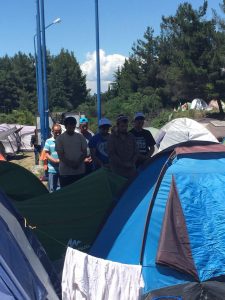 Praying to God!  Only He will be able to get these souls out of here.

Standing in the “food line.”  How demoralizing!  Getting rationed food.  It does beat starving.  However, I was told that the food was not tasty.  It is edible but they have minimal choices because they can not cook at government camps like this one. 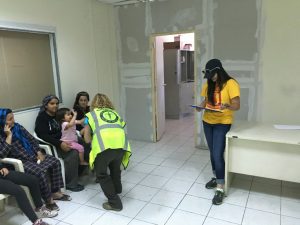 Anisah continued to exemplify working in a makeshift clinic. 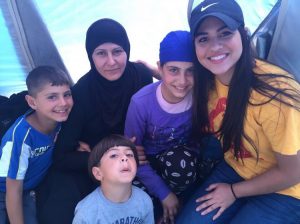 Anisah playing Frisbee with a bunch of kids.  Helping them pass the day.

The highlight of our day was to go see Anisah’s friend, Rawan.  As you may recall, Rawan was the sweetest girl in Camp Hara.  She came to our mobile medical unit everyday till we left Hara due to some violence.  A friend of mine told me that her family tried to cross the border two nights ago and were caught by the Macedonia police.  They were sent back to Greece. 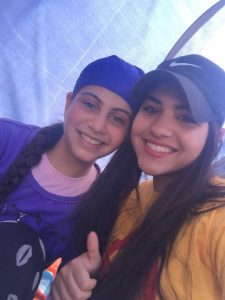 We wanted to say our goodbyes.  It was difficult to find her and her family.  Camp Hara is not a government camp.  It is an unofficial camp.  This is the closest to the Macedonia border.  If you can get through, you may be fortunate to keep going…into the Balkans or even Germany.

We found her because of Anisah’s ability to speak Arabic.  The tents at Hara continue to move like a “shell game.”  We found Rawan’s mother and father.  Even in these difficult times, they were very genuine and hospitable.  They invited us into their tent.  They offered milk and apples. 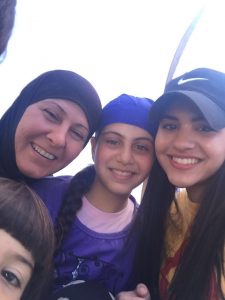 After speaking to Rawan’s family, we gave them some money to help them through these difficult times.  Rawan’s mother began to sob.  She said that she felt like an animal living in these conditions.  They have been living in refugee camps for over a year.   The tears in her eyes made both of us quite emotional.  The surprising aspect of Rawan was her smile.  She continued to be stoic and hugged her mother.  She is the oldest of 7 kids.  She posed for some pictures and followed us to our car.  She even picked some flowers before we left.  We drove for 30 minutes in complete silence.  That moment will remain indelible in my being.

We thank you for all your kind words and prayers.  It will be exciting to come home.  To see Shabana, Zayba, and Lina will truly be fantastic.  Coming to the office to see my friends and dearest patients will be amazing.  However, leaving these people in such a precarious situation is quite difficult.  We all should strive to be better people by helping one and another, in any way.

Thank You All from Thessaloniki.  May God Bless You and Your Beautiful Families!

From the Olean Times Herald Today we relate the remarkable story of an area physician who, during a flight across END_OF_DOCUMENT_TOKEN_TO_BE_REPLACED