Each day here gets more interesting.  Our team will not be going to Camp Hara because of gun violence between various people in the camps.  Very unsettling. 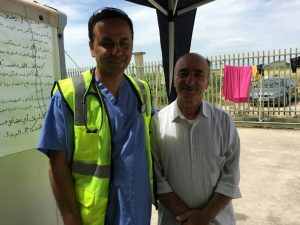 My first patient was this 67 year old man.  He has been a Refugee twice.  He left Iraq during the US invasion 10 years ago.  He told me that his 5 brothers were killed in the war.

When I asked him his age, he said that he was younger than me.  I started to chuckle.  Then he said that he was healthier and better looking, too.  I agreed with him with a smile and a handshake.  His story is quite sad.  After his brothers were killed, he left Baghdad and moved to Homs, Syria.  He lived their for 10 years and had his own business.  He was happy and at peace.  However, the Syrian Government attacked Homs because of the rebellion was initiated in Homs.  Now, he left his home again to come here.  He was extremely nice and respectful for the care I provided. 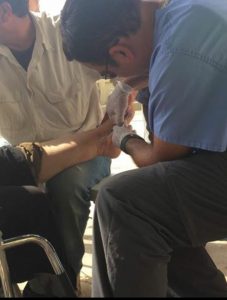 Besides being a Dentist and a Pediatrician, yet again today, I was an Orthopod.  Besides reviewing XRays on a patient with a Fibular Fracture, I was evaluating the ankle of the lady above.  She apparently was having complications with her wound from ankle surgery.  Sure, being an OB/GYN is my profession, I suppose I should come back to Olean and continue what I am doing here.  Save people trips to see my colleagues.

Camp Sindos is apparently the best camp in our network.  However, their is huge run off pond next to the Camp.  People are being eaten alive by mosquitos.  I saw so many kids with mosquito bites.  Not to mention that they also wanted lollipops.   Anisah worked in triage today and handled these kids, quite admirably.

In my opinion, the conditions are not favorable in this camp.

The biggest concern is the inability of these refugees to reside in peace.  The conditions are ripe for tension and violence.  You put 1000 people in a cramped warehouse with poor hygienic conditions, 95 F heat with 100% humidity.  You get the picture.  I was removing all the medications from our clinic, at the end of the day, and placed it in the lockbox in the local police station which is on site. I was ready to leave, but a fight broke out.

Two women, one Arab and the other was a Kurd.  These two “cultures” do not get along.  There has been strife for centuries based on these ethnicities.  These two women were involved in a heated argument which led to a fight.  Punches, kicks, etc were thrown.  They were taken into police custody.  While I was storing our medications, the husbands and families poured into the police station.  The fight escalated in the police station.   Unfortunately, I was stuck in the police station while people were fighting inches away from me.  Thank God, no one had a gun.  The police took a long time to settle this down.  Finally, I was able to get out.  The police commander looked at me and said, “Have a Nice Day!  Are you coming tomorrow?”

Well, we shall see!

Have a Wonderful Day!

From the Olean Times Herald Today we relate the remarkable story of an area physician who, during a flight across END_OF_DOCUMENT_TOKEN_TO_BE_REPLACED