Day 1: Update from the Refugee Camp

We met with the team comprised of mainly British and a few Americans. The lead person, Dr. Afsana is originally from London. Her parents are from Bangladesh. She is a Family Practitioner and was originally supposed to be here for 2 weeks, as a volunteer physician. She now has been here for close to a month and will be here another 2 weeks. That is passion.

Our team was comprised of 3 physicians. Two of them are from London, England and myself. There are 2 Arabic Translators and an ER Nurse from London. Then you my daughter, Anisah.

We were sent to Camp Hara. 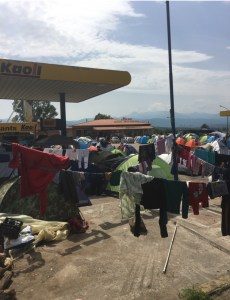 Camp Hara is on the Border with Greece and Macedonia. This is the last hope. People try to cross the border at this point. Mostly are males. However, I did meet a woman who was smuggled by a Pakistani and she made it to the Serbian Border which is about 160 miles away. She made it by foot, till she was caught and sent back.

The camp is on a Gas Station Ground, next to a restaurant called, Hara. About 1000 people are at this camp. There are multiple “non-official” camps in Greece. Our group, SAMS, Syrian American Medical Society, are in charge of three. They sent Anisah and myself there because we spoke, Urdu, a Pakistani dialect. Most of the refugees are Syrian. However, there are a significant Afghani, Pakistani, Kurdish, and Iranian population. Our linguistic skills did come in handy. This is “tent city.” They live in the tent. They do their cooking and cleaning here. This is their home. There is no running water on site. There 20 or so “Port a Pottys” for their use. Some have money so they can buy a few things from the Gas Station and Restaurant.

Our clinic was a Minivan with a Tarp. 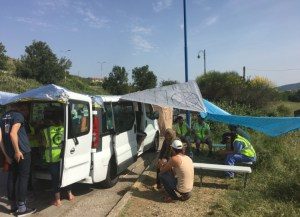 Our team saw about 110 patients. Mostly, men who had injuries and other issues. Since, I was the only OB/GYN, I saw mainly women, some who were pregnant.

As on the Facebook Page, the first patient I met was about 6 weeks Pregnant. She told me through our translator that she did not want to have her baby born here. She wanted a termination. Very sad and disheartening.

The day went by treating patients in this fashion. Our Pharmacy was the Trunk of the Van.

Most of the patients were younger people who are trying to get across the border. They do not want to be here. The stories were sad and bewildering. People left their homes because of war and turmoil. Many stated that they will “die” trying. Their lives at the camp are so bad that death was better. There is no running water. Food is donated by the government. They live in tents. Most have some money and are educated. This camp is considered to be the “hard core” refugee camp. None I spoke to and treated were “bad” people. Actually, all were respectful and kind.

Anisah bonded with a 13 year old Syrian Girl who was fluent in Arabic and English. She kept on smiling and was very helpful. She wanted to go home. She misses her school and her home. 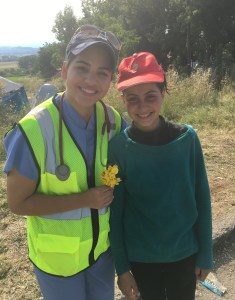 The world is a cruel place. If this is any indication of our next few days, we are in for a very gut-wrenching mission.

From the Olean Times Herald Today we relate the remarkable story of an area physician who, during a flight across END_OF_DOCUMENT_TOKEN_TO_BE_REPLACED