FOR IMMEDIATE RELEASE: LOCAL DOCTOR AND DAUGHTER TO AID REFUGEES IN GREECE 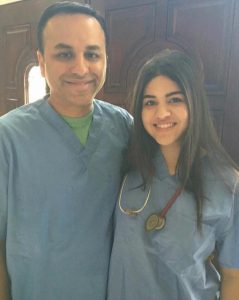 For one local doctor, the scenes of refugees on the evening news has led him to action. Dr. Tahir Chauhdry, who operates Womens Health of Western New York in Olean and a new women’s health office in Bradford will be arriving with his daughter Anisah at a refugee camp near Thessaloniki, Greece this weekend.
“Providing humanitarian and medical relief is the least that Anisah, myself and all the people who have supported this mission can do. Some in spirit, others in words of encouragement, or through financial donations. We are all truly blessed to be living in our beautiful country. We are all human. We all deserve to be treated that way,” said Chauhdry.

He explained that about 50,000 Refugees are currently living in Greece. Six months ago, the peak refugee population was over 200,000. “These refugees have fled their homes in Syria, Afghanistan, Iraq, and Pakistan. The majority of these people have left due to war, religious persecution and other atrocities. They are going to countries such as Turkey, Jordan, Greece, and Italy. Most are trying to join their families in Western Europe. The trek is arduous and life threatening. Some flee via land and other via the Mediterranean Sea. This harrowing journey has been successful for some. Unfortunately, the Mediterranean route has been a graveyard for many.”

Chauhdry is going on the mission through a medical relief organization, Syrian American Medical Society, (SAMS). SAMS has established clinics in Syria, Lebanon, Jordan, Turkey and Greece. SAMS is one of many Non Government Organizations, NGOs, that are working on the front lines of crisis relief to alleviate the suffering of the Syrian People. Chauhdry said that this is a nonpolitical, nonprofit, professional/medical relief organization.

According to Chauhdry, many of the Refugees initially entered Greece. However, the massive influx into Europe through Greece has created issues. Many entered illegally. Some, have paid smugglers their life savings to be reunited with their loved ones in Germany, France, the Balkans and other European Countries. Europeans are facing a similar situation as Americans are. Illegal immigration has caused economic, political, social, and religious strife in many European Countries. Some fear the possibility of terrorism since many have entered without any form of “vetting.” The European Union, also known as the EU, has made a deal with Turkey. All new refugees entering Greece will be returned to Turkey in exchange for approximately $6 Billion. For each Syrian returned to Turkey, Europe has promised to accept another Syrian living in a Turkish camp.

Since the border with Macedonia is closed, about 40,000 refugees have been trapped in squalid conditions. Living in makeshift camps has become a major issue. Currently these camps are in the process of being cleared.

Currently, the SAMS team is operating a clinic at Sindos, a government camp, but Chauhdry said the medical staff at the camp is dwindling. SAMS has sent medical volunteer teams on a weekly basis to these areas for many months.

Though Chauhdry is an OB-GYN, he will be providing all types of medical care while serving at the camp.

“I was with the First US Medical Team that arrived in Northern Pakistan in 2005. Pakistan suffered its worst Earthquake and it claimed about 100,000 people and injured about 70,000. In 2013, I went with IMANA to Haiti to provide Medical Care to the underprivileged and earthquake victims.” said Chauhdry.

Anisah, who is a senior at Olean High School will be entering her Freshman Year at St. Bonaventure University. She has participated in several local volunteer activities with Olean High School, Olean General Hospital, Olean Food Pantry, and IMANA. This will be her first major medical-humanitarian mission. She hopes to become a physician after college, and while in Greece, will be serve as her father’s assistant.

Chauhdry said, “We are so lucky to live in the greatest country in the World. We have so much to be thankful for. Sometimes, it is necessary to aid the less fortunate of the world. We do take things for granted. Even basic needs are hard pressed for these refugees. Many of these refugees are Doctors, Lawyers, Businessmen, Teachers, etc. They have risked everything to find a better tomorrow for their families. Leaving their homes and lives because of war and violence is a tragedy in and of itself. Many chose to leave. Most have stayed in Syria. These poor souls are fleeing the same tyranny the world is fighting. Fanatics, such as ISIS, Al-Qaeda, and the Assad Regime have tarnished a truly peaceful religion. Islam does not promote violence. A few have ‘hijacked’ my religion, killed and injured scores of innocent people, and displaced many of their countrymen.”

The cost of travel, lodging, and any other expenses from the trip are were covered by Dr. Chauhdry himself, but he has received more than $5,000 in donations from people in the community who want to help.

From the Olean Times Herald Today we relate the remarkable story of an area physician who, during a flight across END_OF_DOCUMENT_TOKEN_TO_BE_REPLACED