Today was “moving day.”  SAMS acquired two new government camps.  These camps have approximately 500 people in each.    They haven’t had a solid medical team.

We had to pick up medications from our warehouse 20 miles north of us.  The “pharmacy” is in the basement of a deserted building.  Only the finest for us…..nonetheless, we found enough medications to run our two new clinics.

The first camp was relatively ready for us.  We brought and sorted our medications.  Relatively easy and we left. 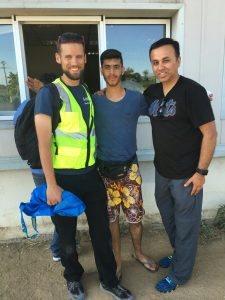 However, the fun began as soon as we arrived to the second camp.  The Greek Military is at every government camp.  While we were parking our vehicles, a Greek Officer jumped out of his office and frantically summoned us.  Keep this in mind, we do not speak Greek.  He did not speak English.  Get the picture?  I ran inside with our team to assess the issue.  A refugee, 20 years of age, was unconscious upon our arrival.  Our team quickly assessed the patient and resuscitated him.  As soon as we tried to test his blood sugar, he sat up and shrugged us off.  Then, he fell backwards.  We had some oral rehydration tablets and placed it in water.  He would not drink it.   I basically threatened the young man.  Through a translator, option 1, drink the fluids or option 2, get stuck with an IV.  He chose option 1.  After 10 seconds, he motioned to me to start the IV.  My Arabic is non existent.  He wanted the IV…he got it.  After giving his fluid bolus, he became more alert and awake.   One of my team members told me that I was a “hard ass.”    My reply, “I am only nice to my lady patients.”  We all got a chuckle and moved on.

Some people think that physicians have no domestic skills.  My mother and Shabana have trained me well.  I mopped the floor.  Does not sound like much, but I rather vacuum.  Nonetheless, the clinic was set up for tomorrow. 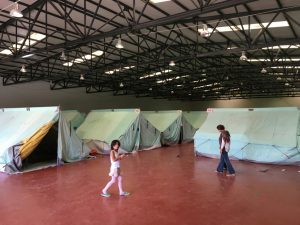 The camp looks quite typical.  However, the last camp we went to had no running water.  The Greek Government brings barely enough water and places it in a tank.  People drink, clean, and bathe from the same water.  The supply runs out very fast.  What a sad place.  Living in Europe and water is a problem?  The sanitary conditions are horrendous.  Using a “Port a Potty” in 90 F heat can be extremely difficult.    The air smelled of fecal material.  How can these people live here?  Can you imagine this?  I was there today, and I still can not fathom the idea. 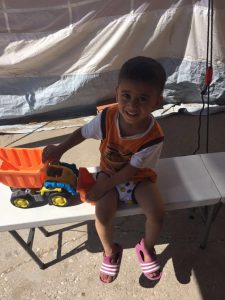 Tomorrow is our last day here.  We will be leaving early Sunday.   I would like to thank all that have given me donations for this worthy cause.  I did give approximately $3000 to our coordinator this evening.  She assures me that it will be used for the refugees and their needs.  I hope that our efforts and prayers are not in vain.

Thank you again.  Anisah and myself plan on going to Camp Hara tomorrow after working in the new clinic.  Camp Hara is going to be shut down in the next few days.  Our team no longer works there because of consistent violence in the camp.  We are going to try to see Anisah’s friend and say our goodbyes.  We know we are going home.  These people do not.  That is the sad thing.

I hope to give a report on tomorrow’s emotional departure.   Good Night.  I appreciate everyone’s kindness and support.   Words can not do justice.  I am truly humbled by you all.  God Bless!

From the Olean Times Herald Today we relate the remarkable story of an area physician who, during a flight across END_OF_DOCUMENT_TOKEN_TO_BE_REPLACED