Day 3
I am the “senior” doctor on this team.  Whether this is a good thing is left to be determined.  Nonetheless, Anisah and myself were sent to the Sindos Camp.  It is the largest government camp run by the Greek Government that the Syrian American Medical Society runs.
The picture above continues to haunt Medical Aid workers.  During the night, the Russians bombed a hospital in Idlib, Syria.  This killed 60 people including children and medical workers.  SAMS is taking its stand with this picture of our entire team. 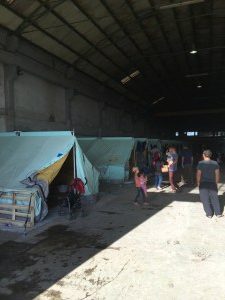 The Sindos Camp is nothing more than an abandoned warehouse.  Approximately 1000 people live here.  It is better than Camp Hara.  During the night, Camp Hara had multiple shootings.  We will not be sending any teams there for a few days.  The ironic thing about the camp is that it is behind a Mercedes Benz Dealership.  Nonetheless, the tents are comprised of families in a structured fashion.  Structured does not necessarily mean nice.  Can you imagine, living, sleeping, eating, etc in a tent?  How about for a month?  How about for 6 months?  Try a year!  This is the true possibility.
My office is a sauna.  Nothing more than a large shed.  Better than the Minivan which served as our clinic.

The inside is very simple.    Two patients can be examined.  Our Pharmacy is on a shelf with common medications. 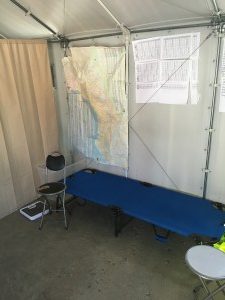 The first man I met was another Pakistani.  They are everywhere.  He was so happy to see me.  He said that he has not spoken his “native tongue” for years.  He married an Iraqi woman and has spoken Arabic ever since.  The weird thing was that he told me that his parents and brothers are in Buffalo!  I did not mention where I lived till that point.  He was promised by the UN team that he would be granted asylum for his linguistic skills considering he spoke both Arabic and English.  He was very upset and skeptical now because he has been told the same thing for the last 6 months.  This is the mindset of so many of these people.  They are seeing that their situation is bleak and a future may be very sketchy.
I played Dentist today.  I diagnosed a cavity.  I examined three pregnant women who had issues.  The rest were pediatric and adult medicine.
More to come tomorrow!

From the Olean Times Herald Today we relate the remarkable story of an area physician who, during a flight across END_OF_DOCUMENT_TOKEN_TO_BE_REPLACED