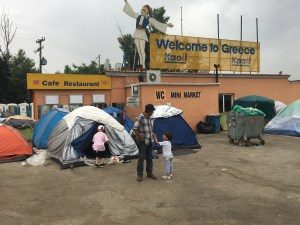 We were sent again to Camp Hara.  The camp was smaller in number than yesterday.  It appears that many have left.  Some are fleeing Greece in hopes to make it to countries such as Germany.  Others have left to go to the Eco Camp.  The rumor is that these un-official camps are closing.  Many of these people will not be able to seek asylum.  These people are the Pakistanis, Afghanis, and Iranians.  Europeans are reluctant to take the Syrians into their countries until the process is completed of vetting.
Nonetheless, it was hot and humid.  The temperature was 90 F and about 100% humidity.  Today, many people were burning trash.  The people continue to live in the parking of the Hara Hotel/Restaurant.  The mood was a bit different.   People were leaving the camps and wanted care, rather quickly.
Our team today comprised of 2 physicians which included myself, Anisah, a Nurse, and 2 Translators.  They keep sending Anisah and myself to this camp because we speak Urdu.  This language is understood by some Afghanis and Pakistanis.  We have spoken more Urdu in the last 2 days than a whole year.
We saw about 100 patients from Noon to 6 pm.  It was impressive in my opinion because our team worked very well together.  Being an OB/GYN, I don’t see much out of my realm.  Today, I was an Orthopod, a Pediatrician, an Internist, a Dermatologist, a Neurologist, an Ophthalmologist, a Dentist, a Podiatrist, not to mention an OB/GYN. 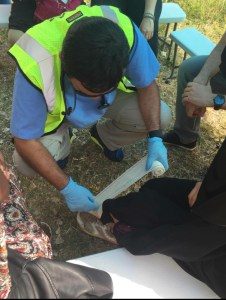 It was an emotional day for Anisah where a young girl, who is from Syria, gave her a present.   This girl has her whole life in front of her but is in a precarious situation.  Her family is educated.  She speaks fluent English and wishes to become a doctor, someday.  Who knows if her dream will come true. 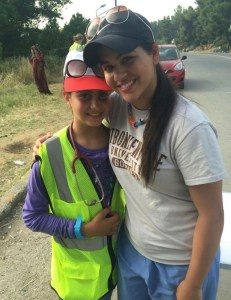 Today is Memorial Day.  Honor our fallen heroes.  They have given their lives for the freedom we cherish.  I am proud to be an American.  However, my heart goes out to these people because I am a Human.

From the Olean Times Herald Today we relate the remarkable story of an area physician who, during a flight across END_OF_DOCUMENT_TOKEN_TO_BE_REPLACED